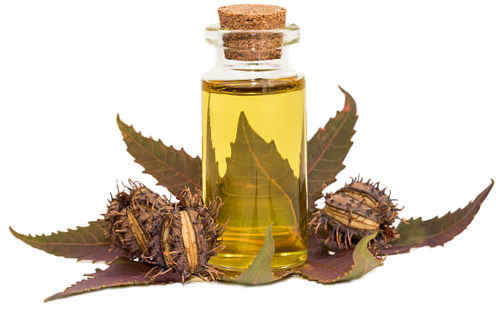 Castor Oil has deep roots in India. It has been used for centuries in Ayurvedic medicine for its skin-healing, digestive-soothing and antibacterial properties. We also have knowledge of it being used by ancient Egyptians as a powerful skin care remedy.

Today, many parents and grandparents still choose this natural remedy to treat a variety of ailments as well as to boost immune function and speed up the process of healing. It’s used both topically on the skin and orally. Castor Oil is universally considered very safe, although, like with all natural remedies, in some people it may produce allergic reactions, therefore, a patch test is always recommended.

So where does Castor Oil come from, actually? This wonderful oil, also sometimes called Ricinus Oil, is derived from castor seeds, which are the seeds of the castor bean plant (Ricinus communis), one of the oldest cultivated crops in the world.

Why is Castor Oil so popular and widely used, you ask? Castor Oil’s primary constituent, ricinoleic acid, is a specific compound that is rarely found in other plants or substances. When applied topically, it has marked analgesic and anti-inflammatory effects. It is worth mentioning that Castor Oil contains other beneficial salts and esters that act as skin-conditioning agents and stabilise the texture and consistency of products, making it one of the most popular oils used in the cosmetics industry.

How exactly Castor Oil is useful for your skin?

Acting as a humectant, it moisturises dry, sun-burnt and irritated skin by preventing water loss through the outer layer of the skin, softening and hydrating it, while its anti-inflammatory properties further help reduce pain and redness. It boosts wound and pressure ulcer healing thanks to being effective against many types of bacteria. It also helps acne-prone skin by penetrating deep into the skin and fighting bacteria overgrowth that can clog pores. Moreover, it helps encourage stronger, shinier, thicker hair, lubricating the hair shaft, increasing flexibility and decreasing the chance of breakage.

Join our mission of promoting eco-living!

Sign up to our newsletter and stay up to date with the latest news, offers & tips.